Sourced and secured the first significant round of equity financing from high profile investors including pre-eminent Allen & Company and EMVentures to capitalize the company’s operations and future growth.

MatchCraft provides a best-in-class marketing platform that enables companies operating in 42 countries, supporting over 24 unique languages and dialects to successfully sell and manage search, display, and social campaigns for their advertisers. Unlike other marketing technology platforms, the MatchCraft AdVantage platform helps organizations efficiently manage campaigns of all sizes, enabling clients to deliver spectacular results to their advertisers.

With a very limited budget and a mindset open to all the possibilities, we began from scratch to create a unique series of inclusive and highly interactive emerging market CEO “match making” forums – published as the center-piece of Chief Executive Magazine –and paved the way for multi-million dollar alliances and long term investment in the former USSR, Russia, (Perestroika) Mexico, (NAFTA) Germany (Reunification) Poland, Hungary, the Czech Republic.

Our mantra was to ignite ideas and collaboration between all the counterparts and build strong relationships of mutual benefit. We first travelled to Moscow with only a list of names of potential U.S. and European participants. In the world of social dynamics, referrals are gold. To meet our goals, we had the good fortune to forge a mutually successful alliance with Vladimir Scherbakov, former first deputy prime minister of the USSR, and founder of the International Investment and Privatization Fund to co-create the first significant meeting in Russia. In Mexico, a key advisor to Televisa’s Emilio Azcarraga, opened many doors to top Mexican CEOS and government leaders to collaborate on the forum in San Miguel de Allende. We continued to build strong relationships of mutual benefit in other countries.

Helmut Markwort had a dream to start a second weekly news magazine in Germany. The official consensus of the German public was “this guy must be mad”: 54 attempts and 54 failures had been made to challenge Der Spiegel’s long standing monopoly.

Only his publisher Hubert Burda had the belief in this dream. We worked alongside Helmut Markwort, founder and editor in chief of FOCUS, to effectively position the magazine at signature events in New York City at the Metropolitan Museum and in Davos at the prestigious World Economic Forum – to establish contact with more than 300 global leaders, including Microsoft’s Bill Gates, WPP’s Sir Martin Sorrell and Dell’s Michael Dell. Two hours after its launch, FOCUS sold out on the newsstands! It was considered one of the most successful launches ever.

As a tribute to the power of creative energies, we proposed Dr. Hubert Burda, Germany’s Agent of Change, to co-produce the first interactive educational CD-ROM from Steven Spielberg and his Shoah Foundation.

Narrated by Leonardo DiCaprio and Winona Ryder, it engages students in an examination of racism, hatred, and anti-Semitism to promote tolerance. According to Steven Spielberg, “to learn history, you must look in history’s eye,” and we were inspired to present the CD-ROM in Germany, first to young people at a high school in Berlin. We acted as a liaison to facilitate a joint cooperation between members of the German government, the Central Council of Jews in Germany, the Shoah Foundation and Hubert Burda Media to develop a highly publicized and historic two-day event attended by Mr. Spielberg and 500 global business leaders.

What struck us the most about the BGU scientists and consultants we interviewed at Ben Gurion University of the Negev, (BGU) a public research university in Beer-Sheva, Israel, was their need to respect cultural and traditional differences in order to insure success of their projects– to build competence and skills for survival through inter-University programs and cooperation—in Kazakhstan, Argentina, Egypt, Jordan, Kenya and the Palestinian Authority.”Lord (George) Weidnefeld asked us to find an interesting way to spotlight the cutting-edge solutions developed by BGU. He was a British publisher, newspaper columnist and philanthropist on good terms with popes, prime ministers, presidents. We were inspired to develop “In Search of Solutions” –a one-hour film concept for television–to chronicle their “practical humanitarianism” as world leaders of the next millennium in the field of technology, agriculture and sustainable development of human resources. 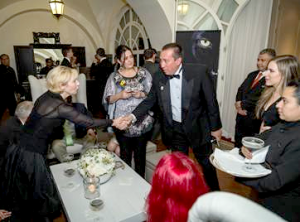 With a foothold in 35 countries around the world, the company was completely unknown in Mexico and faced off against some big names/major contenders, with deep extensive relationships.

Today it has the potential for significant revenue growth– through a partnership we established with one of the most powerful and prominent groups in Mexico. We facilitated and oversaw several areas of cooperation to “top position” its unique technology offerings and created a myriad of successful customer/partner/investor relationships in Mexico. We were very confident we could make this partnership happen. Our team comprised of experts and consultants who worked alongside Felipe de Jesús Calderón Hinojosa GCB, President of Mexico and high profile Mexican business leaders, initiated and accelerated effective dialogues with political and business leaders, including the telecom sector, and we involved them when they could add value to the client’s needs.

The Windsor Energy Group (WEG) chaired by Lord David Howell, former UK Secretary of State for Transport and Energy.– we colloborate on U.S.-U.K. green initiatives with business leaders, environmental advocates and technology innovators from across all industries– hosted at St George’s in Windsor Castle.

Also, in collaboration with the Windsor Energy Group, developing a concept for a Sustainability Council, comprised of a richly diverse multi-stakeholder public-private cooperation across all industries. The focus on promoting an action-oriented set of proven & implemented sustainability solutions & systemic initiatives appropriate to each industry, footprint, geography, assets, and people. For more information or to become a member, please contact eliz@ebaylesassociates.com